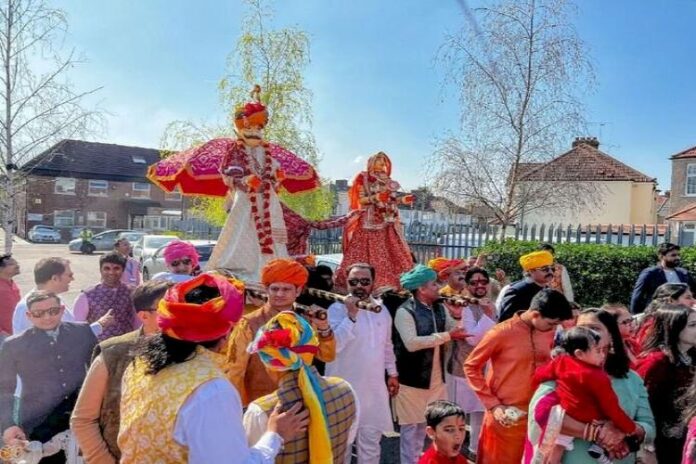 Spread the love
The magic of the rainbow shade of Indian culture was spoken even in foreign countries. The Rajasthani culture spread a great smell among the whites across the seven seas, and the British also kept watching with hypnotism. In London, hosted by the Rajasthan Association of UK, Teejanis, dressed in colorful robes, celebrated the festival of Gangaur in the name of ‘London Gangaur’ with reverence and gaiety.
The chairman of the organization Harendrasinh Jodha told from London that more than 500 people participated in this biggest Gangaur event outside India. The guests enjoyed the ‘Shobha Yatra’, a ride on the ‘Isar-Gaur’ (symbol of Shiva-Parvati) where the Sanstha’s band ‘Marudhar Express’ enthralled everyone with heart-warming tunes. The band consists of women, men and children. After this all the women performed rituals and sang the Gangaur song ‘Gor Gomti’ in a grand worship ceremony.
He told that the children, men and women were overwhelmed by the colorful cultural performance. The program concluded with the traditional folk dance – Mahaghoomar, where the women danced for 1.5 hours. Children Savi, Kunjal and Maanvi performed at Ghoomar and Jaya Sharma at Rang De. Nikita Pareek performed at Mere Piya Ghar today. Priyanka Jadhav thrilled on Gori Gori Gajaban. Anjali and Vivek’s performance captivated me. Guest Mayuri said that the event brought back many memories of Gangaur, I made new friends, Rajasthani food is delicious and people are friendly.”
Rajasthan Day and ‘Mother’s Day’ celebrated Mother’s Day and Rajasthan Day were also celebrated with enthusiasm and enthusiasm in the host of Rak. Where children made beautiful cards for their mothers. It is noteworthy that in the UK, Rajasthan Day is celebrated in March.
The Kunbo team said that “the Rak organization believes in connecting the Rajasthani people living in the UK to their roots.